Anthracnose is an important disease of strawberry with all parts of the plant (fruit, crowns, leaves, petioles and runners) being susceptible to the pathogen. Three related species of the fungus Colletotrichum, including C. acutatum, C. gloeosporioides, and C. fragariae can be associated with anthracnose. However, C. acutatum is the main pathogen associated with the anthracnose fruit rot (AFR) phase and the main topic of this factsheet. Disease control is difficult when environmental conditions are favorable for disease development (see predisposing conditions below) and if inoculum is present. The disease can be especially destructive to susceptible California strawberry cultivars (e.g. Chandler, Camarosa, Albion) when grown on black plastic.

Anthracnose fruit rot appears as brown to black, water-soaked spots on green and ripe fruit (Figure SS-1, Figure SS-2). Firm, sunken brown to black lesions can develop over time depending on the prevalent relative humidity at the time of disease development. Pink, salmon, or orange-colored masses of spores may form in the lesion under humid conditions (Figure SS-3, Figure SS-6) where lesions may appear less sunken and brownish. Under dry conditions, lesions appear more sunken and black and the entire fruit may dry up to be mummified (Figure SS-2). Buds, pedicels, peduncles, and flowers of most cultivars are susceptible to C. acutatum (Figure SS-4). Flowers may also die and dry out. If infection occurs shortly after pollination, the developing fruit remains small, hard, and misshapen. The pathogen can also wash down into the root zone and cause black lesions on roots (Figure SS-4). Infected tips can lead to widespread infections on young tissue of the plug plants (Figure SS-4) and plant loss (Figure SS-5). Infected tissue placed in an incubation chamber will sporulate within 24 hours. Symptoms can also be confused with Alternaria fruit rot, Phomopsis frit rot, Rhizoctonia dry rot, or hail damage, but the combination of signs (spores) and symptoms is diagnostic for this disease. 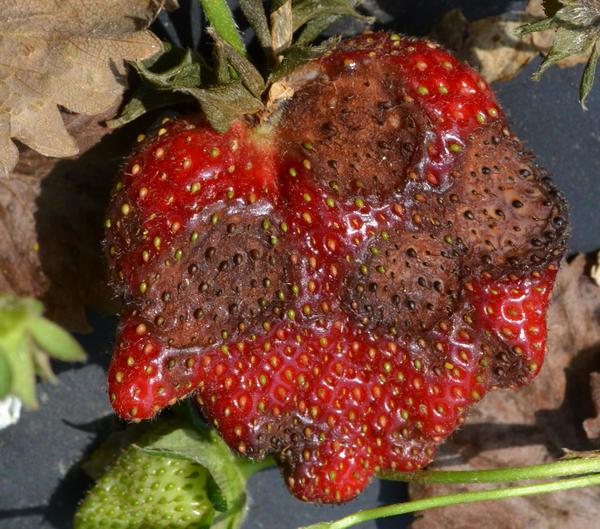 Figure SS-1: Anthracnose ripe fruit rot showing multiple lesions on a mature fruit. Note lesions are sunken and in this case have an orange coloration due to the presence of millions of spores.

Figure SS-1: Anthracnose ripe fruit rot showing multiple lesions on a mature fruit. Note lesions are sunken and in this case have an orange coloration due to the presence of millions of spores.

Figure SS-2: Anthracnose Fruit Rot showing a range of symptoms on green fruit, newly formed lesions, fruit nearly covered by lesions and spores, and a mummified fruit that has dried down.

Figure SS-2: Anthracnose Fruit Rot showing a range of symptoms on green fruit, newly formed lesions, fruit nearly covered by lesions and spores, and a mummified fruit that has dried down. 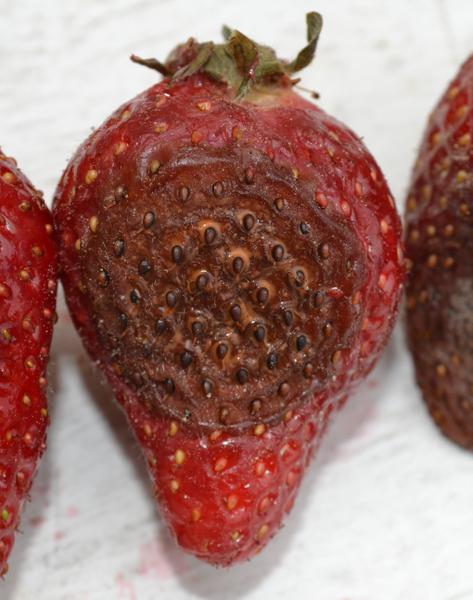 Figure SS-3: Anthracnose fruit rot showing a large sunken lesion with massive amounts of sticky orange spores within the lesion. This picture was taken from fruit within a field.

Figure SS-3: Anthracnose fruit rot showing a large sunken lesion with massive amounts of sticky orange spores within the lesion. This picture was taken from fruit within a field. 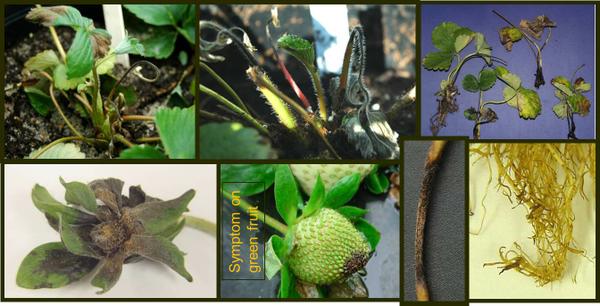 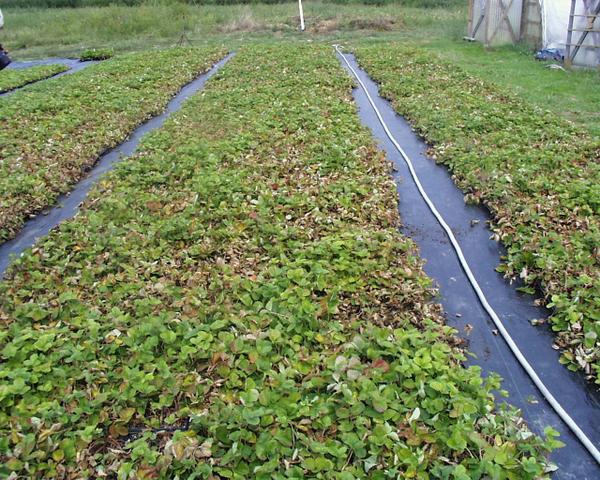 Figure SS-5: Severe plant damage in a plug operation due to Colletotrichum acutatum. More than 60,000 plugs were lost. Symptoms often show up first as ?sunken? areas of growth within a tray or across several trays due to plant stunting; then plant death.

Figure SS-5: Severe plant damage in a plug operation due to Colletotrichum acutatum. More than 60,000 plugs were lost. Symptoms often show up first as ?sunken? areas of growth within a tray or across several trays due to plant stunting; then plant death. 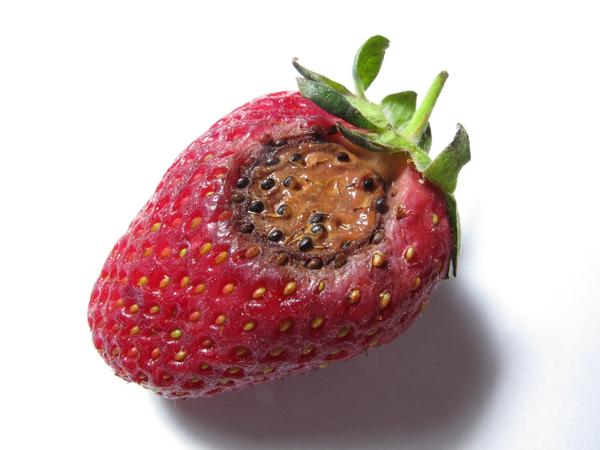 The primary source of anthracnose inoculum enters the fields on strawberry transplants (Figure DC-1). The pathogen can grow in green tissue, even without showing any symptoms, then remain inactive or even produce spores. When the green tissue dies, the fungus becomes active and can produce many spores (Figure DC-2). C. acutatum has been reported to survive in soil and plant debris for nine months, and C. acutatum may infect weeds growing alongside of the field. The pathogen can survive on live plant tissue over the summer. However, for the AFR pathogen in North Carolina, field experience suggests over-summered inoculum in soils or weeds is not important and infected strawberry transplants are the primary source of inoculum. Peppers with fruit anthracnose, caused by the same species may also pose a threat. In the case of the ACR pathogen, most fruiting fields become infected through transplants.

Conidia are produced in abundance on petioles, runners, and fruit and are dispersed through rain-splash, especially wind-driven rain. Movement of machinery and workers through the field also may contribute to inoculum spread. Warm, humid conditions are optimal for this disease, thus cultural practices that encourage aeration and rapid drying of fruit should be used. Straw mulches may help to reduce the dispersal of spores in splashing water, but plastic mulches provide a springboard for droplets, thus encouraging the spread of disease. Overhead irrigation can also contribute to disease spread. 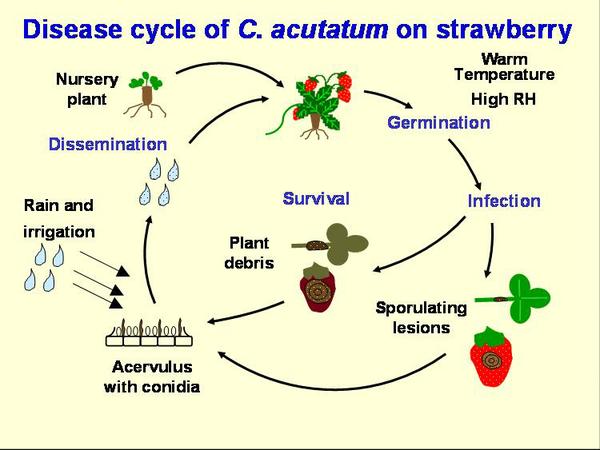 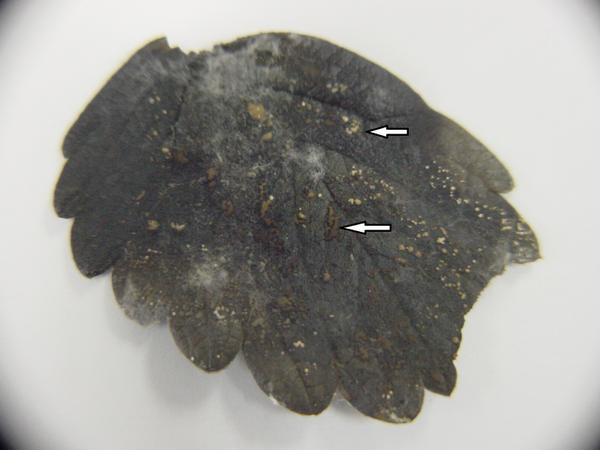 Figure DC-2: This leaf was dipped in paraquat herbicide that caused sudden tissue death. Once the leaf was dead, the pathogen, Colletotrichum acutatum, grew out as orange masses of spores borne on structures called acervuli.

Figure DC-2: This leaf was dipped in paraquat herbicide that caused sudden tissue death. Once the leaf was dead, the pathogen, Colletotrichum acutatum, grew out as orange masses of spores borne on structures called acervuli.

Rarely does anthracnose recur year after year on the same farm in annual production systems. The disease has been associated with asymptomatic plants imported from transplant supply nurseries. ACR can originate from wild species, as discussed above. Thus, the use of disease-free plants is the most important management strategy for controlling this disease. Currently there is no reliable protocol to sample plants and detect the pathogen to declare ALL plants anthracnose free. Plants have reduced risk of disease if they have been micropropagated and then entered into a strict plant certification program managed by a third party or by the nursery operation. Following strict and well accepted guidelines reduces the risk of anthracnose in nurseries.

Resistant cultivars are available and breeding efforts have shown promise. For example, Sweet Charlie is less susceptible to the fruit rot phase than other cultivars commonly grown on plastic. A recent NCSU release called ‘BISH’ has good tolerance. It will get about 5% fruit rot resistance when ‘Chandler’ gets 75% incidence. However, ‘Bish’ is not suited to all geographic production regions.

Periodic scouting of a field, especially during warm and wet weather, will enable early detection of anthracnose. If the problem seems to be associated with hot spots in the field, remove and destroy (bury or burn) infected plants and surrounding plants (5 to 10 foot radius). Killing the plants with herbicide will initiate spore production by the pathogen, and if these plants are not removed the problem will be aggravated.

Nitrogen levels should be kept at the required level, since high nitrogen levels in the soil favor fungal development. Keep foliage dry and reduce water splash by use of drip irrigation to help lower conidial dispersal and spread of the pathogen. Use calcium nitrate sources for nitrogen instead of ammonium. Ammonium forms of nitrogen are readily accessible to the pathogen.

Rotation out of strawberries for 2 or 3 years will help to rid the field of inoculum from infected plant tissues or infested debris in the soil. However, in North Carolina and surrounding States, the experience has been that anthracnose does not commonly reappear a second year in a field unless the disease is re-introduced on contaminated plants or if plants from the previous year persist on the farm over summer. Therefore, all plants should be killed when harvest is done and if AFR was present.

Fungicides play a major role in the management of this disease. Fungicide applications are critical in problem fields during early and full bloom. These fungicides are targeted to limit the build-up of the pathogen, even though symptoms are usually not visible. In research tests, the bloom sprays are critical; if AFR is known to be present, do not wait to see fruit symptoms before applying an efficacious fungicide. If fungicides are applied beginning when the first AFR symptoms occur on the fruit then control will be poor initially, since it takes 10 to 14 days to slow down an epidemic and protect new fruit.

Growers must manage fungicides to avoid the development of resistant populations. A detailed fungicide schedule is available on our regional Strawberry IPM Guide updated yearly.

Colletotrichum species are anamorphic, necrotrophic fungi that are capable of infecting fruit, buds, blossoms, petioles, runners, crowns, and foliage of strawberry plants. Anthracnose fruit rot is caused primarily by Colletotrichum acutatum and is one of the most destructive diseases on strawberry worldwide. Colletotrichum gloeosporioides is less frequently associated with anthracnose fruit rot but occasionally it produces symptoms indistinguishable to those of C. acutatum on strawberry fruit. Species of Colletotrichum are traditionally identified by conidial morphology, presence or absence of setae, presence or absence of a teleomorph state, and colony color (Gunnell and Gubler, 1992).

C. acutatum produces straight, cylindrical conidia (8.5-16.5 x 2.5-4 µm) with attenuated or pointed ends. Conidia form rose, salmon pink, or orange masses and are produced in an acervulus. Setae (4-6 x 3-3.5 µm) are much shorter than those of other species, generally aseptate, and are rarely produced. C. acutatum does not have a teliomorph state (Peres et al., 2005).

Conidia of C. gloeosporioides are cylindrical, rounded at the base, and measure 14.5-17 x 4-4.5 µm. This species produces 1-3 septate setae (70-103 x 3.5-4.5) and forms perithecia of the teliomorph state, G. cingulata. Colonies of C. gloeosporioides have dense, white mycelial growth that turn a dark olive-grey color with age (Gunnell and Gubler, 1992; Smith, 1998).

Traditionally, morphological characteristics such as conidial shape, the presence or absence of setae, and colony color have been used to differentiate Colletotrichum species. These traits, however, are highly variable among isolates and often subject to interpretation.

The morphological differences between C. acutatum and C. gloeosporioides are too subtle for reliable differentiation when cultured on PDA. To make measurements and morphological observations of conidia and setae, isolates should be cultured on strawberry leaf agar (SLA) under continuous fluorescent light. An important cultural difference that is useful in determining species of Colletotrichum is growth rate. The growth rate of C. acutatum in culture is slower than other Colletotrichum species at all temperatures with the greatest difference being at 32°C.

ITS sequence analyses can be performed to identify species of Colletotrichum. The internal transcribed spacer regions, including the 5.8 rDNA, can be amplified using universal primers ITS1 and ITS4 (Garrido et al., 2009).

This NC State FactSheet can be viewed and printed at https://content.ces.ncsu.edu/publication/anthracnose-fruit-rot-of-strawberry.